On Saturday August 13 Milwaukee IWOC (The Incarcerated Worker's Organizing Committee of the Industrial Workers of the World) organized a day of solidarity with the Dying to Live hunger strikers. This action was an unqualified success.

We invited a coalition of various prisoner support groups and radical activists from around Wisconsin to the most pro-prison town in the state, turnt out loudly against the prison, shamed targeted enemies, and then came back to Milwaukee in time to take the streets alongside people rebelling in response to yet another police murder.

This action was taken in solidarity with Cesar DeLeon and LaRon McKinley, as well as many other prisoners currently or recently on hunger strike in Wisconsin's prisons. It is important that we follow up on this action, to ensure that the guards we pissed off don't take their frustrations out on the prisoners. Please call in to support.

We rolled with reformists, abolitionists, formerly incarcerated people, family members, atheist, muslim, christian, jew, black, white, brown, men and women of all ages, we defended each other, raged and cried and laughed together, and got ready for more together. It was an intensely sad and beautiful day, followed by a night to match.
Record of this action and future activities can be found via #DyingToLiveWI hashtag and #‎MilwaukeeUprising‬. 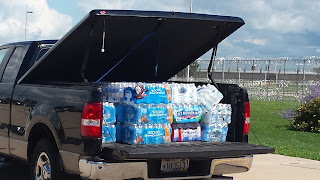 Truly, the action started on Thurday night. WISDOM, an organization of people of faith across Wisconsin united with Ex-Prisoners Organizing (ExPO) to call for change in Wisconsin's prison system. The theme for the night was "Thirsting For Justice". There were impassioned speeches about solitary confinement, contaminated water, old law prisoners, compassionate release, crime-less revocation of parole or probation, all of these specific and horrible ways that the State of Wisconsin both keeps people in cages through underhanded tricks and tortures them once they are inside.

Dozens of elected officials were invited to attend well in advance, and none came to hear these stories from their constituents. The attendees were encouraged to bring bottled water to deliver to Fox Lake and Waupun Correctional, which have terribly polluted water that the prisoners are forced to drink and bathe in.

The prisons failed to answer WISDOM as to whether or not they will accept this water and allow their captives to drink clean water. A few days before the event, a journalist asked the prison, and the authorities told them the water would not be accepted, for fear of tampering (and fear of undermining the commissary's monopoly on selling drinkable water to the prisoners).

Burning Shit Down
Posted by Ben Turk at 4:52 PM